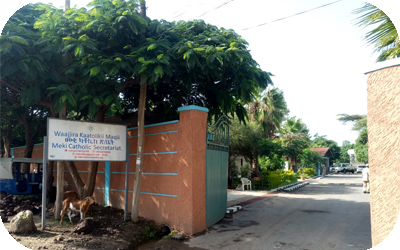 The Apostolic Vicariate of Meki had been one of the ten dioceses of the Ethiopian Catholic Church during its establishment in 1974. Its operational territory was part of Apostolic Vicariate of Harar. The Vicariate had come to form Meki Catholic Secretariat (MCS) office following the decentralization of the Ethiopian Catholic Secretariat (ECS) office in 1995.Then, the newly structured MCS office developed systems to manage the pastoral and the development activities of the Church in such a way of Pastoral Coordination Office of Meki (PACM) located at Gighessa, while the Social Development Coordinating Office of Meki (SDCOM) located at Meki town up until now.

The working area of the Vicariate included part of East Shoa, the whole Arsi and Bale zones of Oromia National Regional State. A few areas are around Wendo Genet & Alaba from the Southern Nations Nationalities and People Regional State (SNNPRS). The Vicariate area coverage was estimated to be 160,000 sq. kms, with a population around six million people. The Church started social services and development activities as a means of reaching people with various human and social needs, like Education in a formal school, Health clinics, hospital and responding to Emergency outbreaks within the secretariat in a humble and basic ways. Gradually, the administration of these social services and other development interventions gave impetus for the establishment of the Social Development Coordination Office of Meki (SDCOM) in 2006.

Thereon, SDCOM has come to lead the first organizational strategic plan that served for five years starting from 2006 to 2011 and as a result organizational culture has been confirmed with financial and administrative manuals. Then, the second phase of strategic plan has been carried out from 2013 to 2017 having eight thematic sectors in three zones of operational areas of Arsi, West Arsi and part of East Shoa zones having a population of 4.3 million in which the total area covers 56,000 sq. km, apart from Bale zone which has been departed as a prefecture in 1992. During the second phase of the strategic plan, the name of the organization became Social and Development Coordination Commission Office of Meki (SDCCOM) following with the charity proclamation released in the country.

Again, SDCCCOM has hosted the third round of organizational strategic plan starting from 2017 to 2021 dealing with six thematic areas of interventions which are: -Currently, the organization has gone through major restructuring process and its current name being Social and Development Commission Branch Office of Meki (SDCBOM) and also the development offices are organized into three sub-branch offices in three zones in order to simplify its organizational management capacity and to be close to the heart-felt needs of the community.

To bear witness to the love by promoting the integral human development of all members of the Ethiopian Society by ensuring growth and self-reliance through evangelization with the aim of social transformation.

To realize on Ethiopian Society where the spiritual, physical, socioeconomic and cultural needs of the people are met and where all peoples live in harmony, solidarity, equality, love and peace.